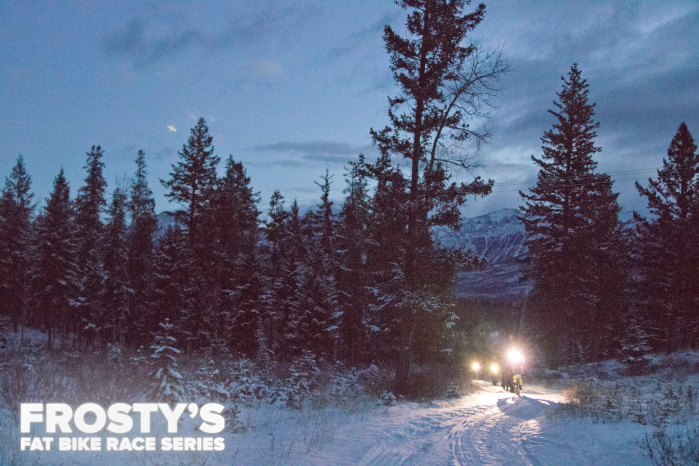 I’m home from Jasper, Alberta where Frosty’s Fat Bike XC and 50K races were held.  With an Arctic flow consuming the Canadian Rockies I knew my week there would be spent in daytime negative digit temperatures.  I will admit, I was daunted by this.  In preparation for my trip I reached out to Karen Jarkow who won Fat Bike World Championships in 2017 in -25 Fahrenheit, my coach who has athletes in the Upper Peninsula and train outside year-round, and a friend who races JP’s Fat Bike Pursuit successfully every year.  I spent the weeks leading up to my trip experimenting with apparel and gear (see my blog) and I arrived in a snow storm and -22 Fahrenheit temps (before wind chill).  Game on!

I was hosted by Fairmont Jasper Park Lodge for the week, which let me fine tune my equipment, clothing and nutrition strategies before the three days of races and events began. I had several surprises and a steep learning curve but marked success by:

“It’s all about the tires”

You hear this all the time from fat bikers, but how your bike engages with the snow is the difference between floating across terrain or sinking so deep your axels are at snow level.  My “must have” tires for any snow condition are Kenda Tire Juggernaut 4.8’s. They always find traction, roll fast on hard pack, and have a sidewall that allows for even spreading of the tread across the snow.  I spend the first few minutes of any ride adjusting my tire pressure.  My start-point is generally 3PSI in the front and 3.5PSI in the rear.

Frostbite is not a love-bite

In extreme cold, frostbite can happen in just a few minutes, especially if the wind is blowing, if you are wet from sweat, or if skin is exposed even briefly as when taking a glove off to open a snack.  A solid layering solution that prevents wind from getting in but allows moisture to escape is a must.

When it’s cold, you desire to eat and drink is meh’ at best.  However, just keeping warm consumes a lot of calories.  Not to mention you are exercising!  Liquids freeze.  Hydration and nutrition is a bit of a conundrum.

Now that you have all the tools to ride in extreme cold AND have fun, don’t gloat to your friends when they are suffering.  Remember, misery loves company.  Better yet, be a real friend and share these tips with them before you head out on a chilly adventure. Please share your new-found tricks with me too.  I’m headed back to Frosty’s in Jasper next year!

The guys at aid station #3 said I only had two more miles of climbing until the final 8-mile descent to the finish line.  I’m still climbing at snail’s pace, and it’s been over five miles since I left their false promises.  This has been a long day.  The Point to Point boasts over 15,000 ft. of climbing in the Wasatch mountains over the course of 76 miles, and I have been in misery since mile 25.  I am trying not to let the well-intentioned misinformation from the volunteers at aid #3 dim my spirits.  Just keep pedaling.

The Back-Story to This Moment

I lined up to race this morning with some amazing women I was thrilled to chase.  Not having raced this distance or elevation profile before, I knew this race would be a learning experience for me.  I had abandoned my warm-up routine when my hands, feet and nose were numb in the (very) early morning chill, and opted to regain feeling in my extremities huddled with several other racers in the heated women’s bathroom.  Park City has heated public bathrooms at trailheads; fancy!  No longer shivering, I rolled to the start line. An air cannon shot cereal into the air, beginning my Park City Point to Point escapade.

The Pro Women did not begin with a social pace that winds up to race pace over the first 20 minutes of racing allowing riders to warm-up in the actual race as is typical for ultra-endurance distances.  Normally ultra-endurance races begin at a social pace that slowly builds to race pace over the first 20 minutes of a race, which allows riders to warm up. But not today. Instead, we tore from the line sprinting in short-course fashion.  I love to jockey for a spot in the lead pack, so I gave chase but regretted not properly warming up.  We ripped through Round Valley, and I was in heaven nailing the loose switchbacks on the descents.  The lead pack broke up as we crossed into Deer Crest.  I slowed on this climb realizing I had gone hard off the start and needed to settle into my pace.  Typically, I am a diesel engine distance rider: I slowly build to pace and hold it for the duration.  This puts me behind the pack in the early part of the race, and I slowly pass up through the field to the finish. Today, however, I was a hot rod. I decided I would go fast off the start and hope to put enough distance between myself and the chasing women to hold my position.  This was new.

Having fun with elbow-bumping racing, opportunities to eat were few, and the cool early morning temps distracted me from my need to hydrate. By 10am and just 30 miles in to a 76-mile race, I discovered I had bonked.* Using my normal race strategy, I am a metronome for pace, hydration and nutrition, which keeps me from entering this sad, miserable state.  This was unchartered territory.  I replaced my hydration bladder, which was only half empty (bad!) but did not need to restock my gels because I had not taken a single one (very bad!).  I knew I needed to get some sugar smacks  running through my system ASAP if I was going to overcome the bonk.  I went to the feed station, and nothing looked good.  There were tasty options, but when you are that depleted nothing looks appetizing.  I was in serious trouble!  I tried to eat a cookie as I rolled away from the first aid station and was nauseous.  I am sorry to admit I fed most of it to the squirrels.  *See footnote at end of article for a definition of “bonked.”

Climbing Park City Mountain Resort was pure drudgery.  I was getting passed.  And passed some more.  It was heartbreaking, but I knew my current situation was my own doing.  Then finally, halleluiah! I reached John’s  99 trail, and the technical descent, a non-energy consuming strength of mine, restored my spirits.  I felt like I deserved the “pro grease”  number on my calf again until the next climb where my legs cramped and the men I passed on the previous descent enjoyed zipping past.  My mantra kept me going, “Drink. Eat.  Ride the efficient line. Keep pedaling. You’ve got this.”

At the bottom of Crescent Mine Grade, the second aid station greeted me.  I told myself that if I was not having fun I could call it quits here.  Cheering friends brought sanity back to my thoughts.  I was suffering, but I was not in danger of injuring myself.  I was not going to be on the podium today, but that is not why I race.  I had made a series of tactical mistakes, but this would be a point to improve upon moving forward in my career.  So, I left aid station #2 to climb Armstrong and knew I would see this through.  No excuses.

With cheeks packed with potato chips from the third and final aid station (I was hoping they would dissolve and enter my bloodstream without my body realizing I was eating), I finally hit the descent from The Canyons to the Utah Olympic Park where the finish line mercifully received me.  Done. I got this done.  It was not pretty.  It was not a race to brag about.  I am proud to be a professional cyclist, but today was humbling.   With TUNA coach Chris holding my bike so I could dismount on wobbly legs, my sister eagerly embracing me despite a sweat-soaked kit and a thick coating of dust, my DH skills coach Brandon spraying me down car-wash style, and Summit Bike Team director Lori  enticing me to the ice cream parlor, I realized there was no embarrassment for me to hold on to.  Racing is an adventure, and if everything went perfectly it would be mundane.  Victory is not dictated by a number or the approval of others, it is marked by reaching beyond what feels possible.  Today I won by overcoming fear of perceived failure.  My podium was learning how mentally strong I am amidst physical meltdown. My award was the love lavished nonjudgmentally on me by my cycling community.   Define your own success.

*Definition of Bonking While Mountain Biking

All photos unless otherwise noted are from Angie Harker at Selective Vision.